After hearing (from a photographer) of all the altering a client once requested on a shoot, I wanted to make MY OWN video showing everything that goes into taking a photo from start to finish. Something short and sweet that encapsulates the truth, which is essentially turning a model into an exaggerated "better" version of themselves, depending on who you are asking. By now, the prevalence of Photoshop in the industry is as well known as wrestling being fake -- you see what I did there! That mascara you bought because the ad didn't look like a strip of eyelashes, had a skilled craftsman behind the computer altering and lengthening the lashes one at a time to appease their client. Every 10/10 model that passes by me in a casting is just a few tweaks away from being an 11 with the help of Photoshop. It's used everywhere, on everything and everyone, leaving us, a self-conscious society who feels they can't measure up to the magazine beauties or that seemingly hot 50 yr old woman who doesn't look a day over 20 on all her profile pictures, feeling inadequate. In walks, AVERAGE JILL, to save the day revealing Photoshop's dirty scheme to take over the world. See my image prior to the 'shopping' and let me set it straight that EVEN THE MODELS are not safe from alteration. They are altered more than anyone! It is the job to have thick enough skin that you aren't phased that the photographer decided you would look better with an extra inch added onto your chin for length and blue eyes to match your blond hair. [True story]. However, when it comes to actresses, social media, and magazines, it is advantageous for the younger generation to be reminded it's not real AND SEE IT over and OVER again. Photoshop can be intense, but its also extremely interesting, challenging, creativity invoking, leaving me living in that 'grey area' when it comes to my thoughts on the use of it. But as model with girls who aspire to be like me, it's worth pointing out - that's not me. I'm a girl at home forcing my boyfriend to pop my back acne.

Attempt #2 - reaching out to SI. Last month I reached out by sending a letter, this months attempt will be via email. Special Thanks to LINDSEY HAHN of Lindsey Hahn Photography, follow her on IG @ LindseyHahnphoto . This beauty has worked with some of the Industry's BEST - photographers, actresses, and models! 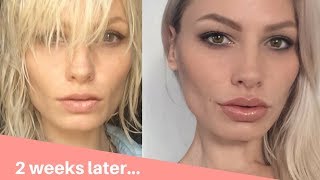 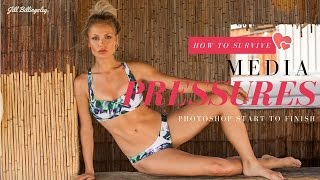 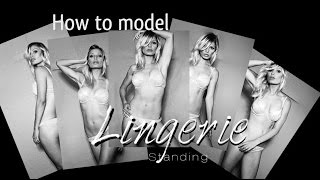